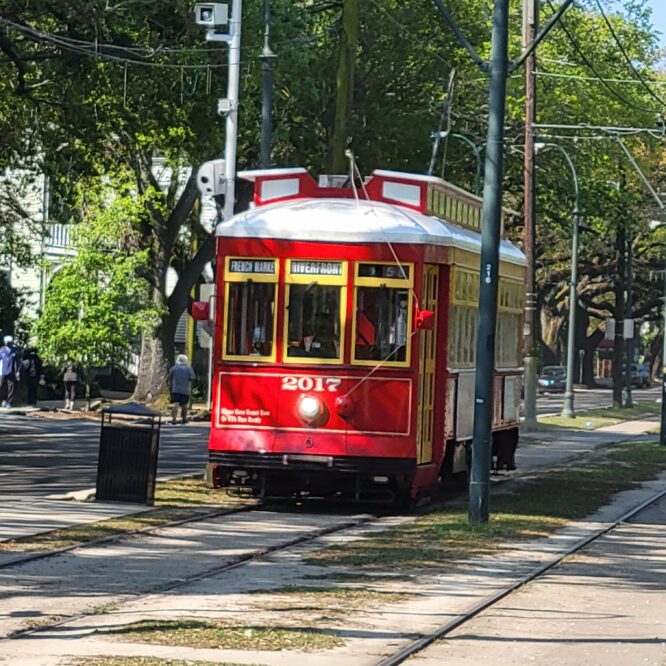 So this was a fun little trip.  We like traveling, and we really like our food.  Since we had a few extra getaway points to burn this year we made a short family trip to New Orleans happen over the Easter weekend.  We sort of winged it, but the official city website has the latest info on what’s open and things to do.

We only had two full days, so our time was seriously cramped.  Plus, it was our first time going to New Orleans so that made it even more interesting.  That being said, there is definitely no lack of activities for any age group.  We have two 6 year olds, so our tour had to be PG rated.  And fast; I mean seriously, we had to pack an entire city in two days. So fast I took the camera but realized later I missed way too many good photo opportunities.

Our two kiddos are animals everything.  So of course the first thing asked in any city is to see the zoo or the aquarium.  Fortunately, NOLA has both.  The Audobon Aquarium and Audobon Zoo are both good family destinations and are both also located near some of the best attractions in the city.  Tip: if it’s warm out get the package deal for both the zoo, the aquarium, and the insect exhibits.  We only did the aquarium due to our limited time, but if you’ve got a few days with kids it makes sense to hit them all.

Of note, for the size ticket prices for the aquarium seemed a little high in comparison to some of the larger and more interactive aquariums we’ve visited in my opinion (Ripley’s, Chattanooga, Boston).  That being said, our kids had no complaints.

You can’t go to New Orleans without visiting the French Quarter.  It’s home to Cafe du Monde, lots of eats, music, Bourbon Street, Steamboats, Audobon Aquarium, and of course shopping.   Since we had a bit of a whirlwind tour I can tell you we only scratched the surface.  Plus, with COVID-19 still on the mind…some of the festivities are dampened.  I say some because Bourbon street was still wall to wall people.

Speaking of Bourbon Street…I made a brief foray into that particular venue.  I had a pretty good idea of what I would find…and if visiting with kids I recommend just staying away.  My own personal opinion is that my children don’t need to be exposed to some of the shenanigans happening there.  Decatur street and much of the rest of the district are more than entertaining enough, and not R-rated.

Just because, make a point to stop at Cafe du Monde for breakfast.  You can’t beat the powdered sugar delights at this place.  Itbpairs even better with the jazz from the street players that are often around.  There are several locations around New Orleans, but for the true experience stop at the one near the French Market.  Just be prepared to stand in line and have cash, no cards accepted.

Do you like old houses?  Colonial style gardens?  Massive oak trees with hanging moss?  The garden district is the place to be for you.  Something that was striking (to me, anyway) was the similarity between the houses of NOLA and the houses of Charleston, SC.  Many homes had the well-kept hedge gardens, that stately colonial feel, and the worked iron fences and railings that are associated with the period.  We spent about half a day just walking and looking, and getting ideas for future home projects.  You’ll find the Audobon park in the Garden District, as well as Loyola University.

Frankly, we travel to eat.  I may enjoy the beach and a cold beer, but I really go for the food.  New Orleans is known for cajun seasoning and it’s unique style of cooking, and it does not disappoint.  It’s hard to go wrong eating in New Orleans, but here’s our choices for the weekend.

I’m a fan of Open Table, Resy, and Yelp when traveling since I have no desire to wait in line for a table when I can be out and about.  Each of the places we went this time around accept reservations through Open Table.

I’ve got to find a brewery anywhere I go.  Forget the domestic swill from the big corporations, microbrewing is where it’s at.  If I can get a good meal with good beer, it’s even better.  Crescent City Brewhouse doesn’t disappoint on either front.  Located on Decatur Street in the French quarter, you’ll hear some of the street music filtering in while you enjoy the food, brews, and local artwork.

On the beer side, the pale ale and the dunkelweiss are solid choices.  Although, according to my daughter, the dunkelweiss looked like it came straight from the swamp.  As unfiltered as it gets, this beer was surprisingly good for the swampy appearance.  The pale ale was light, crisp, and refreshing after a long walk through the aquarium and French quarter.

As far as food…the burger is out of this world.  She may have just been hungry, but according to my better half the Decatur Street burger was the best plain jane burger she’s had.  Given that NOLA is known for its unique take on spice use, I’ll have to take her word for it since it disappeared quickly.  Same with the boudin grilled cheese.  For a grilled cheese sandwich it was definitely not your average sandwich.  The addition of boudin adds a new level of flavor that makes mom’s grilled cheese just plain boring.

Celebrating it’s 100 year anniversary this year, Broussard’s is a French Quarter staple that’s been around since 1920.  Listed as a top dining stop by many travel sites, it does not disappoint.

For starters, the duck and alligator sausage gumbo dives all-on on a New Orleans staple.  You can’t go to NOLA without having gumbo.  For libations the have a anniversary cocktail list that is sure to please.  For a cocktail and a story get the Rougarou.

The gulf fish amandine, for those wanting the catch of the day, is a excellent choice for a light meal.  Finished with a perfect crust and served with rice and fresh beans, this dish has all the right flavors.  For the full experience, you can also go with the three course anniversary special.  Stuffed crab was the choice for my wife’s entree, and just like the burger it disappeared quickly.

Another New Orleans staple, Tujague’s has been around since 1856 and is the second oldest restaurant in town.  On Decatur Street in the French Quarter, you can enjoy a quiet meal at their new location after sampling the downtown sights.

Like Broussard’s, nothing disappoints in the menu.  Only because I like to see how different places prepare the same feature, I went with the gulf fish again.  Completely different flavor profile, and I would be hard-pressed to pick a favorite.

Going to a new city seems like it always has its challenges with regards to movement.  With kids, we prefer to drive, but that also means we usually can’t just call a Uber.

For this trip we found the best way to get around was to buy a transit pass. The iconic NOLA street cars will get you just about anywhere you need to go. After that…AT. We managed 8 miles of walking in the Garden district and Audobon park. For $12 our family of four was able to move around NOLA easily.

Alternatively there are public parking spaces available throughout the city. We did use one of the lots at the riverfront; expect to pay for the privilege ($47 for 6 hours). You should also plan on arriving early, since even when we went in April the spaces filled up quickly.

It was a whirlwind tour of a place that really needs more than two days to fully experience. When, and if, we have the opportunity to go back we’ll plan on a little longer stay to enjoy more of the sights New Orleans has to offer. Maybe next time we’ll get to experience a steamboat ride or bayou tour.